At the Digital Social Summit, you gave the keynote, held a session and talked to a lot of people. What is your impression of the crowd and of their ideas and concerns?

Germans and Europeans in general have a much greater awareness of privacy concerns when it comes to digital data than Americans do. What struck me regarding the GDPR (auf Deutsch: DSGVO) was that there is a sense of OK, we have ticked the boxes. We have written the laws, we are complying with the laws and that is all we need to do. This is obviously better than nothing, laws are important. However, civil society really needs to live up to a different standard than just compliance. Otherwise, there is no reason for us to exist. 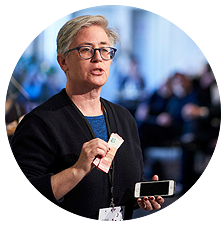 „Civil society really needs to live up to a different standard than just compliance. Otherwise, there is no reason for us to exist.“

The carrot is that bottom-line motivations of business and government are currently driving the use of digital data. Civil society has such an opportunity to create something different.

So, you are advocating a third way: Civil society players should think about what data they really need and want to use on an aggregate level, but they should not intrude into people’s privacy?

Exactly, and you should not just collect data because you can. Cause you are not going to do anything with it. Collect what you need and be honest about it. I feel like saying “Be honest” has become a radical idea although it should be basic. But again, it just comes back to trust. People actually want to participate. They want to help make the world a better place.

But because we have been habituated to a digital environment serving the purposes of a few commercial enterprises and a lot of governments, most of us, not knowing how software code works, have never thought that there is a different possibility. But software code is like an alphabet. You can write a different poem with the software code than the poetry you knew before and are familiar with.

The conversation about the GDPR in Germany often focusses on the bureaucratic burden it poses. You, on the other hand, seem enthusiastic about it. Does this skeptical attitude strike you as odd?

Well, it is a burden. I mean, rules are tough and it is more fun to play without rules. But playing without rules does not serve our purposes in the long run. I don’t want to minimize the regulatory burden that is the GDPR because I don’t have to deal with it myself. It is legitimate. But it should also be a starting place, not an end place. It has got to be a floor, not a ceiling. There is a phrase which is important in this context: The tyranny of convenience. It deals with how we have changed our behavior so significantly because it is easier to do that and it is easier to do this.

But not only organizations, also users often seem annoyed by the GDPR.

The phenomenon is this: the harms of digital data misuse are abstract, and they feel far away. On the other hand, convenience is right here in the palm of your hand. That tradeoff is just tough. The more we use and default to existing technology, the less often we question its nature, the less agency we have and the fewer choices we have. 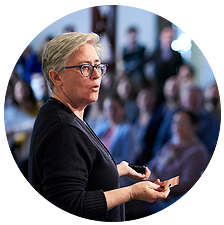 „The harms of digital data misuse are abstract, and they feel far away. On the other hand, convenience is right here in the palm of your hand. That tradeoff is just tough.“

Do you see someone in the digital civil society pushing your agenda?

Apart from that, the organizational domain is the one I pay most attention to. There, you can find things like Europeana, a European collective of digitized libraries and museums. It is an extraordinary example of government-led public resource digitization that is protected and made available for everyone. I can look at some of Europe’s cultural treasures from my home in California! This is not why they did it but it shows that things can be done in a way that is not extracting everything, that is not collecting data and is not selling it against advertising or for some other purpose. It is just a powerful public interested digitization project that does not even require fancy hard-to-write software.

Since you are coming from one: What role do universities play in this movement? Can scientist and researchers educate civil society?

I come from a university that, for a long time, has been educating engineers to go write the code without thinking about the bigger implications. The university I come from, and many more around the world, had a real reckoning that, in fact, just as we train civil engineers to understand why we need to build a bridge that is going to stand, you need to write computer code that is not only extractive. Code that does not solely sell more advertising. It is remarkable how much mental talent is dedicated to selling more ads to people. What a waste, what an extraordinary waste! Why not think about hunger and education and things like that? 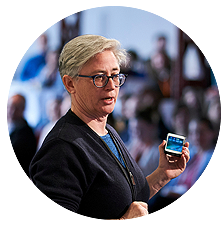 „It is remarkable how much mental talent is dedicated to selling more ads to people. What a waste, what an extraordinary waste!“

So, I think universities do have a big role to play and many of them have taken a much more holistic approach to their engineering curriculum. There is a movement in the US called “public interest technology” which is modelled on public interest law that did not exist in the US 60 years ago. If you went to law school then, you were trained and channeled into a job in the private sector where you would work for big law firms. Then people realized that there is a whole other kind of law: There are civil liberties, there is civil rights law, there is public interest law. And law schools changed dramatically to make that a parallel opportunity for people. This is what universities need to do around computer coding and engineering, too.

Do you see any sense in talking with big tech companies about how they handle personal data and about their business models?

There are efforts at Stanford and elsewhere to work directly with these companies. I don’t think that the people running those companies are bad people, but I think they are very pulled into a business model that has really no room for a different approach. They have no incentives to change their business model until they milked it for everything they possibly can. We can also see small changes, like a feature that shows smartphone users how much time they spend in front of their screen. But most people just look at it, feel guilty for a while and then go on as before. That is also because the business model for most companies still depends on you spending as much time in front of the screen as you possibly can, on those sites. As long as that is the case, we got a problem. But businesses are supposed to make money, so it would be insincere to just say: Stop making money.

Businesses are now beginning to extract information for other purposes as well. They are selling driverless cars and all kinds of other stuff. And companies invest a lot in thinking ahead to what the next business model could be. I think it is the rest of us who are not really imagining what a different future could look like.

Based on this analysis: What are the most important measures and steps for the digital civil society in the next few years?

The first thing is that not-for-profit organizations, foundations and anybody who is mission-driven have got to start looking at how they are using data. They have to ask themselves: “Is this the best way to do this?” That is not going to mean that everybody gets off Facebook. If it were only that simple. But it means that we must pay attention to what we’re doing and we have to make some changes. And there is no reason why everybody can’t do that. We design our organizations, we have an enormous amount of control. We must be more thoughtful about it. 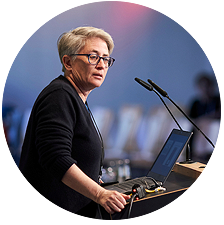 The other thing is: Civil society thinks of itself as being framed by laws and regulations around taxes, charity and the corporate code. Those are the domains civil society advocacy organizations work on. That is a 20th-century policy agenda. The 21st-century agendas are broadband access, net neutrality, intellectual property, consumer protection, state surveillance and the digital rights agenda.

We exist in those digital spaces. And if we continue to allow those spaces to be controlled by these other enterprises, we will cease to exist and cease to matter. If you look at most digital rights campaigns here in Europe and elsewhere, only a small number of digital rights organizations tend to get involved. The rest of civil society is clueless.